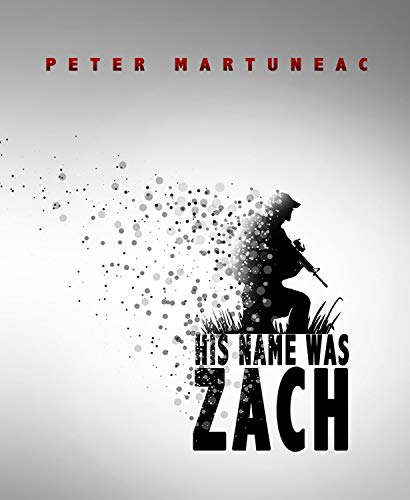 "It might be just what your desiccated flesh is looking for."
RainHand Rating:
Find His Name Was Zach on Amazon, and Goodreads!

‘His Name Was Zach’ looks, on the outside, to follow the now very overdone formula (overdone since long before things like ‘The Walking Dead’) of a standard dystopian zombie apocalypse. And yes, related tropes are present. But the reason something becomes a ‘trope’ to begin with is that the formula generally works, and such stories attract people who are not bothered by that expectation – that’s exactly the kind of story they’re looking for. To that end, if this is the kind of story you’re looking for, I don’t think you’ll be disappointed.

I will admit that this isn’t the most ideal setup for my interest in zombie stories, but that’s a personal matter. I prefer zombie movies to zombie TV shows, because to me it’s all about the shock of the undead hordes as they mow society down (movies don’t typically have the run time to go beyond that part of the story). This book is more like a zombie TV show, due to being set two years after the outbreak. Post-apocalyptic, as opposed to apocalyptic. His Name Was Zach is closer to TWD, or possibly The Last of Us, than it is to a Romero flick. I just wanted a few more scarifying zombie encounters and not as many scarifying people encounters (perhaps I, too, like my tropes).

There’s a lot to appreciate in this lengthy tale. Our two main characters, that we are introduced to immediately on the very first page, have a lot of time to grow as people and in their familial relationship to one another. We, in turn, are given ample reason to become involved in their story – to appreciate their challenges, their emotions, and generally root for them. What happens to them matters to us, and to me that’s a key tenant of good writing. Don’t just show me a bunch of characters, invest me in them. Make me care about them. I won’t give away the ending of course, but I will say that it’s worth the journey that takes you there, so stick with it. Points for all of the above, good show.

The longer a story is, the more difficulty arises from maintaining the audience’s attention, and I did run into a few instances where I felt mine wavering. There are a few scenes that appear to go on far longer than they need to in order to be effective (a certain game of Texas Hold ‘em comes to mind). Also, not being a firearms or military hobbyist/enthusiast, the excessive attention to detail on these things made the story feel a little more distant to me. It’s enough to tell me that the pants are camouflage, the knife is a combat knife, and the handgun is of the 9mm style. I really didn’t need the production years, manufacturer names, what that particular camo pattern is officially called, and so forth, although to someone specifically interested in these topics, such information might be desirable. Detail is good, but this sort of detail didn’t feel relevant to the story. As a writer I know firsthand that it’s hard to cut up your baby. But some scraps just have to end up on the cutting room floor, in order to fit the runtime.

Beyond the above and a few technical issues here and there (a bit heavy on ‘tell’ at some points and some instances of more than one character speaking in the same paragraph), there’s a worthwhile post-apocalyptic zombie tale here, with enough going on between characters and plotline events to keep you reading. If you’re daunted by the length, all I can say is just dive in to the pond and wait for that hook to dig into your desiccated, decaying flesh. It doesn’t take long!


About the Author: Husband, father of two, Boilermaker alum, and former United States Marine. Ever since reading The Lord of the Rings at a young age, Peter has wanted to be a writer. "His Name Was Zach" is his debut novel, followed by the short story prequel"Abby: Alone". A second novel is in the works, entitled "Her Name Was Abby".

Peter's writings tend to share a theme that focuses on PTSD and the different ways people cope with trauma, some healthy and others not. He also writes about redemption, and not being chained to your former self.

P.S. Martuneac is a Romanian name, and is pronounced "Mar-TOO-knee-ack", for all those wondering. ('About' info reprinted from goodreads.com.)