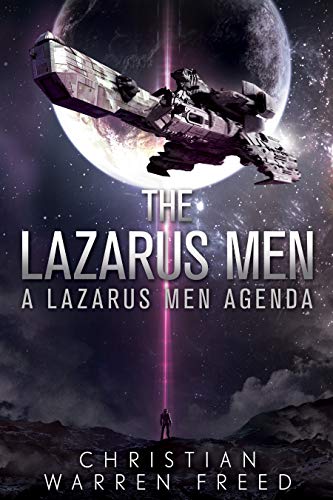 "A good story for those willing to put the time in."
RainHand Rating:
Find The Lazarus Men on Amazon, Goodreads, and Lulu!


(RainHand Books will be beginning its new review initiative after the first of the year. For the time being, please enjoy a selection of my previously published reviews of books by self-published/independent authors, appearing for the first time on Rainhandbooks.com!)

Well, I can say that I'm always a fan of world-building, but the kind of building presented in a story like The Lazarus Men can be an even bigger challenge than that of, say, a fantasy novel where the entire planet is fictional and can be molded to whatever desire the author pleases. Where stories set only a few centuries in "our" future are concerned, one has to be more careful with their nods to the real world, and connecting everything together from what we know, to what we're about to experience, cleanly. I think Mr. Freed has done a good job of that, and for it I applaud him. We have plausible advances in technology, secret organizations, and even at least one non-human race - a proper nod to the idea that by the 23rd century, we might just encounter a few.

I'm a bit undecided on how I feel about the pacing of this story. At some points I felt myself being sufficiently drawn in to the action, and at other points, I found things to be a bit plodding, with perhaps a bit too much in the way of explanation. There's a fine line between making sure you paint a good scene for your readers and 'telling', as the 'show vs. tell' debate goes. Sometimes the battle was won here, and...sometimes not so much.

I believe this has been said in other reviews so I apologize for reiterating, but I admit that I'm also not a huge fan of the idea of an 'everyman' being roped into a world of intrigue, who seems to be able to keep up a little too easily. But then, I like underdog characters who have things stacked against them. I just feel that the aforementioned setup makes for a great opportunity to frustrate our protagonist, by forcing him to learn as he goes. Further, it helps to make a character relatable (and a fantastic plot device) when they don't have a proverbial clue anymore than we do. Gerald doesn't have all the answers, sure...but he sure has a lot for the kinda guy he is.

I know there are some folks out there who twitch a bit over the concept of changing perspectives within the same chapter or the same story at all, but I for one find very little wrong with doing this - indeed, it's rather commonplace in many literary classics, and helps to get inside the head of multiple characters from a third person perspective. It definitely happens here, and though it's possible for it to be done in a jarring way, I felt the instances of this were acceptably small. Just be advised that it does happen, if that sort of thing causes you ulcers.

Despite my concerns, I'm happy to have read this, and I would consider pointing others towards it. I think there's enough going on here to attract an interested sci-fi reader to the story, and perhaps even hope for more at some point.


About the Author: Christian W. Freed was born in Buffalo, N.Y. more years ago than he would like to remember. After spending more than 20 years in the active duty US Army he has turned his talents to writing. Since retiring, he has gone on to publish over 20 military fantasy and science fiction novels, as well as his memoirs from his time in Iraq and Afghanistan, a children's book, and a pair of how to books focused on indie authors and the decision making process for writing a book and what happens after it is published.

His first published book (Hammers in the Wind) has been the #1 free book on Kindle 4 times and he holds a fancy certificate from the L Ron Hubbard Writers of the Future Contest. Ok, so it was for 4th place in one quarter, but it's still recognition from the largest fiction writing contest in the world. And no, he's not a scientologist.

Passionate about history, he combines his knowledge of the past with modern military tactics to create an engaging, quasi-realistic world for the readers. He graduated from Campbell University with a degree in history and is pursuing a Masters of Arts degree in Digital Communications from the University of North Carolina at Chapel Hill.

He currently lives outside of Raleigh, N.C. and devotes his time to writing, his family, and their two Bernese Mountain Dogs. If you drive by you might just find him on the porch with a cigar in one hand and a pen in the other. You can find out more about his work by following him @ https://www.facebook.com/ChristianFreed or on Twitter @christianwfreed. ('About' info reprinted from Amazon.com.)